Maui is a Polynesian Demi God, hes is very well known through the South Pacific, he is talked about all through the South Pacific, Tonga, Fiji, Samoa, Hawaii, New Zealand, just to name a few.This story that I am going to tell you is about Maui which is set on the island of 'Eua in the Kingdom of Tonga. It is about a spectacular Natural archway which is carved out of high dramatic cliffs.

One day on the island of 'Eua, Maui was sleeping in the middle of the island, when his mother woke him up to ho the Kava Plantation, Maui woke up angrily because he was feeling quite lazy.Maui started hoeing the Kava plantation and he was doing it quite angrily, he was hoeing so angrily that he started an earthquake and his mother stopped him because of all the damage he was causing to the island. 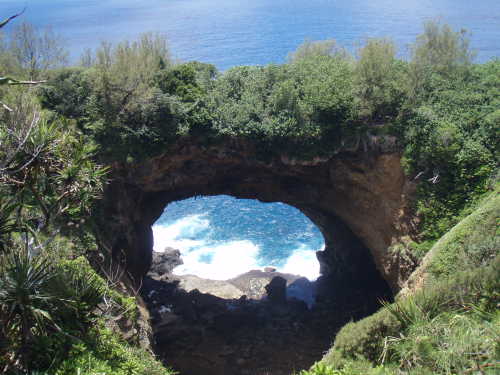 His mother then grabbed the ho from Maui's hand and threw to the South of Eua Is and the ho embeded itself into a huge dramatic cliff face.

So when you visit 'Eua and this arcway on the South end of 'Eua you will actually see how massive this ho would have been and then you you have a idea if how big Maui was, let alone his mother.

Tangaloa And The Story Of How ‘Eua Island Was Created