HOW KING TAUFA'AHAU DEFEATED LAUFILITONGA, THE TU'I TONGA AND BECAME THE REIGNING KING OF TONGA

This is a true story.

They were all fighting each other (civil war) for supremacy, to determine who was the most powerful of them all and consequently become the only king of Tonga.

This civil war went on for years, until there was only two kings left: the reigning Tu'i Tonga (Laufilitonga) from Tongatapu and the Taufa'ahau, the Tu'i Kanokupolu from Ha'apai.

Tonga is made up of five main islands, namely Tongatapu, Ha'apai, Vava'u, Niua and 'Eua.

The Tu'i Tonga of Tongatapu whose name was Laufilitonga sailed to Ha'apai with his warriors in their wooden war canoes primed for battle to fight the Tu'i Kanokupolu of Ha'apai whose name was Taufa'ahau.

In those days, the best and bravest warriors were from 'Eua and notably amongst the best from 'Eua were the fierce 'Eua warriors who were two brothers, Kaufana and Puakatau. Taufa'ahau knew of them so he went to 'Eua to ask for their assistance in his war against Laufilitonga. Taufa'ahau went straight to Ha'aluma beach where Kaufana and his brother Puakatau lived. As when two great warriors meet, they started off by "getting to know each other", engaging in a wrestling match on the beach of Ha'aluma, where they soon realised that they were both no ordinary Tongans due to their strength and fighting abilities.

Kaufana now realising that the man he had confronted was Taufa'ahau the Tu'i Kanokupolu, paid his respects, and getting that out of the way, they rested and introduced themselves properly and Taufa'ahau discussed with Kaufana why he came to 'Eua. Taufa'ahau wanted Kaufana and his brother Puakatau, to come to his aid in his battle with Laufilitonga the Tu'i Tonga. Kaufana accommodated the Taufa'ahau informing him that there was no need for both himself and his brother to go to battle as he believed Puakatau would be more than enough to defeat Laufilitonga and his warriors. Kaufana also owned some guns and firearms, so along with his brother Puakatau, he gave them as well to Taufa'ahau, but under one condition. He made Taufa'ahau promise him that whatever happens to Puakatau in the war, Taufa'ahau was to bring him back to 'Eua, even if he died, Kaufana would like to see his brother's body as he wanted to bury him in their homeland, 'Eua with their ancestors.

Taufa'ahau sailed off to Ha'apai with Puakatau and his warriors from Tongatapu and the firearms Kaufana gave him.

When they arrived in Ha'apai the battle was well under way. This war was called the "Tau 'o Velata" or "The War of Velata".

As the war progressed, it was obvious Taufa'ahau and his warriors from Tongatapu were winning over Ha'apai and Puakatau the 'Eua warrior was easily leading the battle. As time went on and the battle was drawing to an end, Puakatau was so fierce and unstoppable. He was so powerful and impressive with his leadership in the battle that the people and the warriors were looking at Puakatau as a potential king of Tonga. This of course caused a disturbance in the ranks and jealousy in the king.

Now when Taufa'ahau was gathering up men to fight on his side, he approached the noble of the island of 'Uiha in Ha'apai, whose name was Malupo, as they are kinsmen, both coming from the same island of Ha'apai. Malupo had two sons, named Saulala and Haveapava. Malupo's wife Fatafehi, was Laufilitonga the Tu'i Tonga's sister, so that Malupo's sons were nephews of Laufilitonga. Because of their connection, Malupo had no choice but to give his sons to fight for Taufa'ahau against their own uncle, Laufilitonga! Before they left, it was said that their mother cried to her sons, pleading with them to remember who they will be fighting against, their own uncle, and if anything happened, please save him (who is of course her brother).

Now they have come to the last part of the battle, which was to enter the Velata fortress and the final surrenderance of power from the Tu'i Tonga to Taufa'ahau the Tu'i Kanokupolu. But as Puakatau and Taufa'ahau's warriors entered the fortress which means he will assassinate the Tu'i Tonga, Malupo's sons remembered what their mother asked of them, to spare her brother the Tu'i Tonga and who was of course their own uncle. They turned around and stabbed Puakatau in the back with three spears killing him instantly! 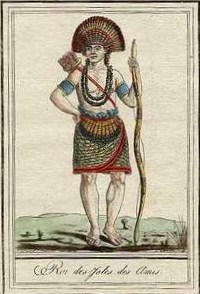 Back in 'Eua, Kaufana heard about the victory at Ha'apai and how his brother had been killed by Taufa'ahau's own warriors. Kaufana was very upset and sailed to Tongatapu to confront the new king. He reminded the king his promise about his dead brother Puakatau, who led and fought the battle so courageously, giving Taufa'ahau the victory over the Tu'i Tonga. Taufa'ahau of course did not live up to his end of the bargain which was to take Puakatau's body to 'Eua to his brother Kaufana. Instead, he ordered that Puakatau be buried at the royal tombs in 'Uiha, Malupo's island, where only kings are buried. The king of course didn't know what to say but as Kaufana was escorted out, Kaufana retorted to Taufa'ahau: "Kuo ke Hau pe, pea ke Kui", meaning, You gave me your word but your victory has blinded you to the promise you made to me. In other words, You got what you want, and you forgot all about our deal! Kaufana sadly went back to 'Eua, broken hearted because he will never see his brother Puakatau, the fearless warrior.

Taufa'ahau wanted to reward his most outstanding warriors by knighting them with the high rank of "noble" or lord. He posted his nobles throughout the country and even the outer islands, except 'Eua. Up to this day 'Eua has never had a noble from its own people. And even to this day, nobles from Tongatapu or from the other islands are appointed to be a stand-in noble for 'Eua, even though they are not from 'Eua. This may explain why 'Eua is the least developed out of the main islands of Tonga. Indeed, this maybe because 'Eua has not got its own noble representation in the government and Parliament, to stand up and speak and fight for what's best for 'Eua and the people of 'Eua.

Tangaloa And The Story Of How 'Eua Island Was Created