Tongan clothing culture is conservative, to say the least.

Woman must cover there knees and elbows and men are usually dressed in pants or Tupenu (cloth wrap skirt) and don't show there knees either. Even the young men if wearing shorts, will were shorts that cover the knees, unless the are playing sports. This goes for swimming to.

It is against the law in Tonga to be topless in public (men and Women). If you are a traveler staying at tourist accommodation then this law doesn't apply. 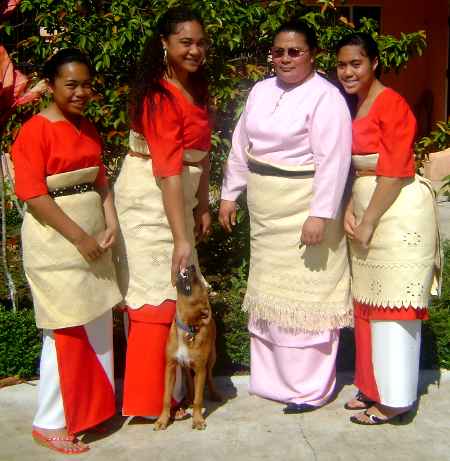 Ta'ovala: The Ta'ovala is the traditional woven mat that is warn by tongan's like a suit and tie is warn by westerners. It is a formal entire and all government workers must wear one. Wearing a Ta'ovala is worn to show respect and authority.

Places that you would feel that a suit was required would be the places that a Tongan would wear there Ta'ovala.

The Ta'ovala is warn over the Tupenu (wrap cloth skirt).

There are different kinds of Ta'ovala for different occasions. But the most common are made from the leaves of the pandanus plant.

Kiekie: The Kiekie is worn around the waist of woman dressing up to go out.

It can be made of all most anything, but most commonly from the pandanus tree and can be best described as a belt with stands that hang down below the knee.

They are purely decorative and at some events like going out to for a dance can be very colourful.

Kafa: The Kafa is a braided rope, used to tie the Ta'ovala up with, like a belt. It is worn be men and woman and it can be made from lots of things.

Traditional it is made from the inner fiber of the coconut husk braided together strand by strand.

There are a lot of different ways to weave a Kafa, and each design has it's own name. The Kafa is not made these ways as much as it once was.

Some Kafa is made from human hair from a dead relative, this type of kafa is held in very high regard and treasured by the family.